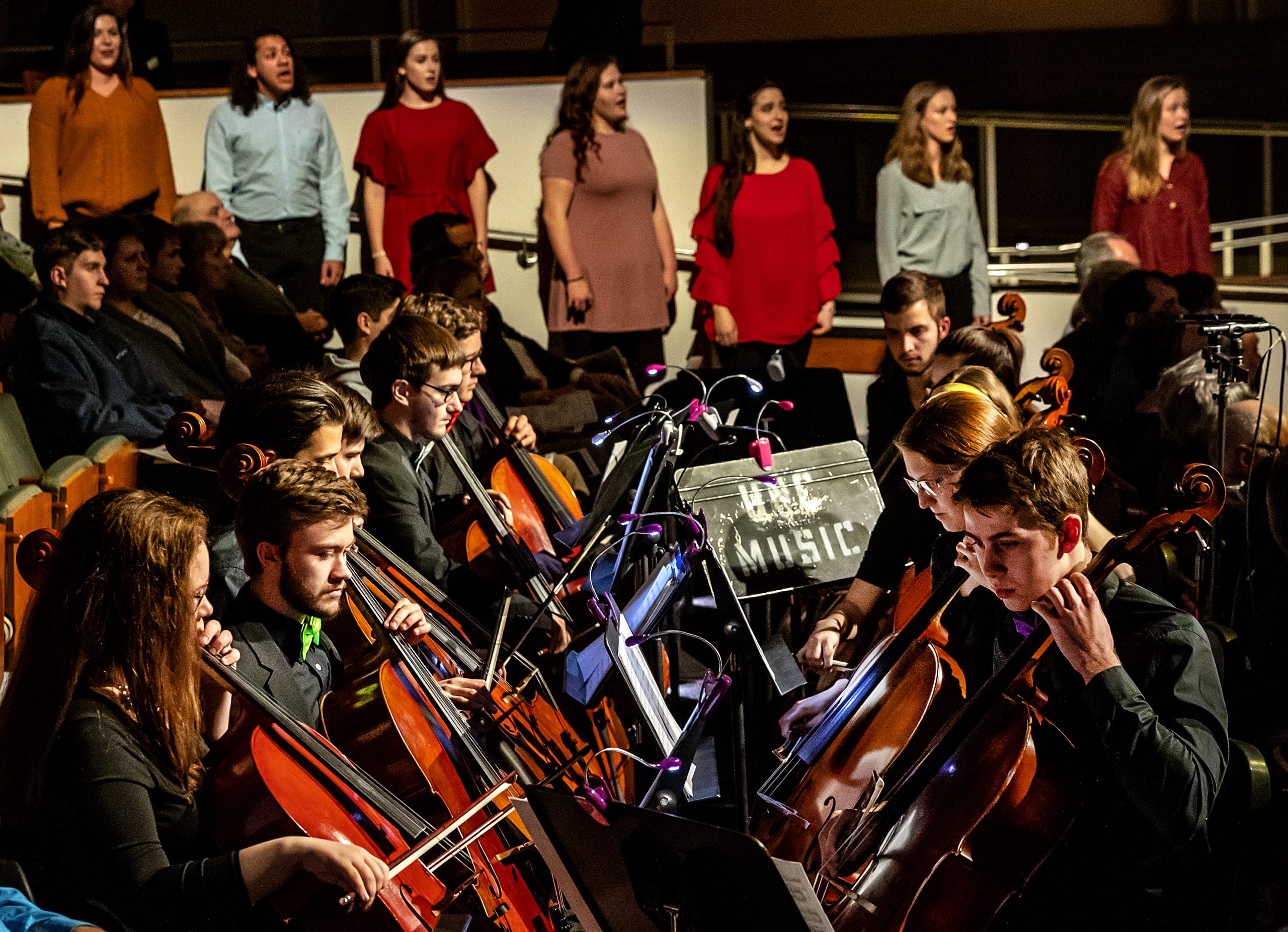 Free and open to the public. Registration for each event closes at 11 AM EDT on the day of the event. Individual registration required for each series event.

Join us for the second-annual Compose Carolina, our summer music series produced in collaboration with UNC Department of Music. This weekly virtual series features the premieres of four original musical compositions ranging in genre and style, written by alumni and students of the UNC Department of Music composition program on a given theme. Our prompt for this year is “In The Now,” to be interpreted freely by the composers, from the literal to the very metaphorical.

This summer, we welcome three new alumni composers, Trinity Vélez-Justo, Alex Van Gils, and Stewart Engart, for the debut of three diverse solo compositions, as well as a group of student composers and musicians who will re-interpret the Greek tale of Orpheus and Eurydice through their score. On Fridays in July, the livestreamed event will feature the artist(s) in conversation with a faculty moderator, the debut of their composition, and a casual “program notes” conversation and Q&A.

Recording of CPA virtual events is not permitted. Check out our livestream events guide for tips on how to watch on your device. If you have questions or concerns related to accessibility, please contact us.

Please note: All events must be registered for separately. Each event is approximately 60 minutes. Ticketholders will receive the link to watch the event via email.

Cristina “Trinity” Vélez-Justo (b. 1990, Kendall Park, NJ, she/her) is a public speaker and educator, and an award-winning composer for film and media through her business ReelScoring, LLC in Charlotte, North Carolina. She relocated from Los Angeles in 2018 after finishing the Television Academy Foundation Internship in Music and working as an assistant to accomplished film and television composers.

Through film festivals and academic institutions, including SXSW and University of North Carolina School of the Arts (as an instructor in the MFA Film Music program), Trinity educates filmmakers and students on the psychological impact of music and sound in film and how to successfully work with a composer. She also speaks internationally about networking in a disconnected world and diversity and inclusion in the industry and creative classroom.

Trinity is starting her Ph.D. in Music Theory with a specialization in Cognitive and Behavioral sciences at the Ohio State University. Her research will focus on how music cultivates empathy and can change perceptions on gender and race in media.

Alex Van Gils (b. 1987, Brooklyn, NY, he/him) is a composer, performer, and generative video artist, exploring the interplay between human and electronic creative agents. In his composition work he creates musical systems that explore, amplify and transform the gestures of human improvisational partners.

Alex lives in Brooklyn, NY, and his active projects include XBUCKET, a performance trio featuring live-processed violin and generative video, and also a discipline of daily audiovisual compositions uploaded to @avg.music on Instagram. Alex holds a Ph. D. in Music Theory and Composition from UC Davis.

Alex is a founding member of Cutelab, where he makes Nestup with Sam Tarakajian, and is the Director of Music and Audio Technology for Musical Mentors Collaborative.

Stewart is currently a Ph.D. Candidate at University of California, Santa Barbara.

Five current music majors come together to create a new telling of the classic story of Orpheus, an ancient Greek tale about love, grief, and deception. Returning Compose Carolina student-composers David Green, James Larkins, and Alex McKeveny are joined this summer by mezzo-soprano Julia Holoman and clarinetist Matthew Svec as they explore these time-honored themes with a new lens.

Alex McKeveny (composer) is a UNC-Chapel Hill junior who is currently double majoring in music and business administration. He played trumpet in the UNC Wind Ensemble, and he plays classical piano. He is a composer of classical music, who has won the Thelma Thompson Composition Award. He also participated in the 2020 Compose Carolina series.

David Green (composer) is a senior at UNC-Chapel Hill pursuing a double major in Music and Russian Language and Culture. A classically trained pianist, his compositions draw inspiration from 20th century trends and late romanticism.

James Larkins (composer) is a rising UNC-Chapel Hill senior, majoring in music and chemistry. He enjoys composing music as well as playing cello. His music has both post-tonal and post-serial elements, and has influences ranging from Renaissance polyphony to the works of modernists like Pierre Boulez and Elliott Carter.

Julia Holoman (mezzo-soprano) is a UNC-Chapel Hill sophomore from Raleigh, North Carolina. Julia has studied classical voice privately for six years; three years under Kimberley Bentley. In 2018, Julia placed first in her room at the National Association of Teachers of Singing (NATS) State and Regional Conferences. Julia went on to place second among all-female high school classical singers at the National level of the NATS Annual Conference in Las Vegas, NV. Julia has been selected to perform with multiple ensembles, including as a soloist for the NC Governors School West Choir in the summer of 2017, the NC Music Educators Association’s (NCMEA) High School Honors Chorus (2015-2018), soloing at the NCMEA Annual Conference in November of 2017, and with the National Association for Music Educators (NAfME) All-National Honors Chorus in Grapevine, TX, in 2016. She is looking forward to performing opera roles of Aminta in Mozart’s Il Re Pastore, L’enfant in Ravel’s L’enfant et les Sortilèges, and Mother in Meredith Monk’s Atlas this year under the direction of Dr. Marc Callahan. She will also be studying in Dr. Jeanne Fischer’s voice studio.

Matthew Svec (clarinet) is a UNC-Chapel Hill sophomore from Roanoke, Virginia. He has studied under Teresa Hedrick and Dr. Cassandra Hibbard and was engaged in several groups in and around the Roanoke area. Matthew was an active member in the Roanoke Youth Symphony, Winds of the Blue Ridge, the Roanoke Valley Community Band, and Blasmusik Aschheim, e.V. In addition, he has soloed with his youth symphony and community band, performed in the Blue Ridge Music Festival, and substituted as principal clarinet for the Rockbridge Symphony Orchestra. He plays in UNC’s Symphony Orchestra, Wind Ensemble, and Chamber Players. He has also recently joined UNC’s Early Music Ensemble as a keyboardist. During the pandemic, Matthew was part of Orchestre de la Francophonie’s first remote festival and performed in an online masterclass with Ricardo Morales. He also hosted several socially distanced wind quintet rehearsals in his driveway. Outside of clarinet, Matthew has played the piano since he was 5 and enjoys learning languages. Matthew is a student of Donald Oehler.