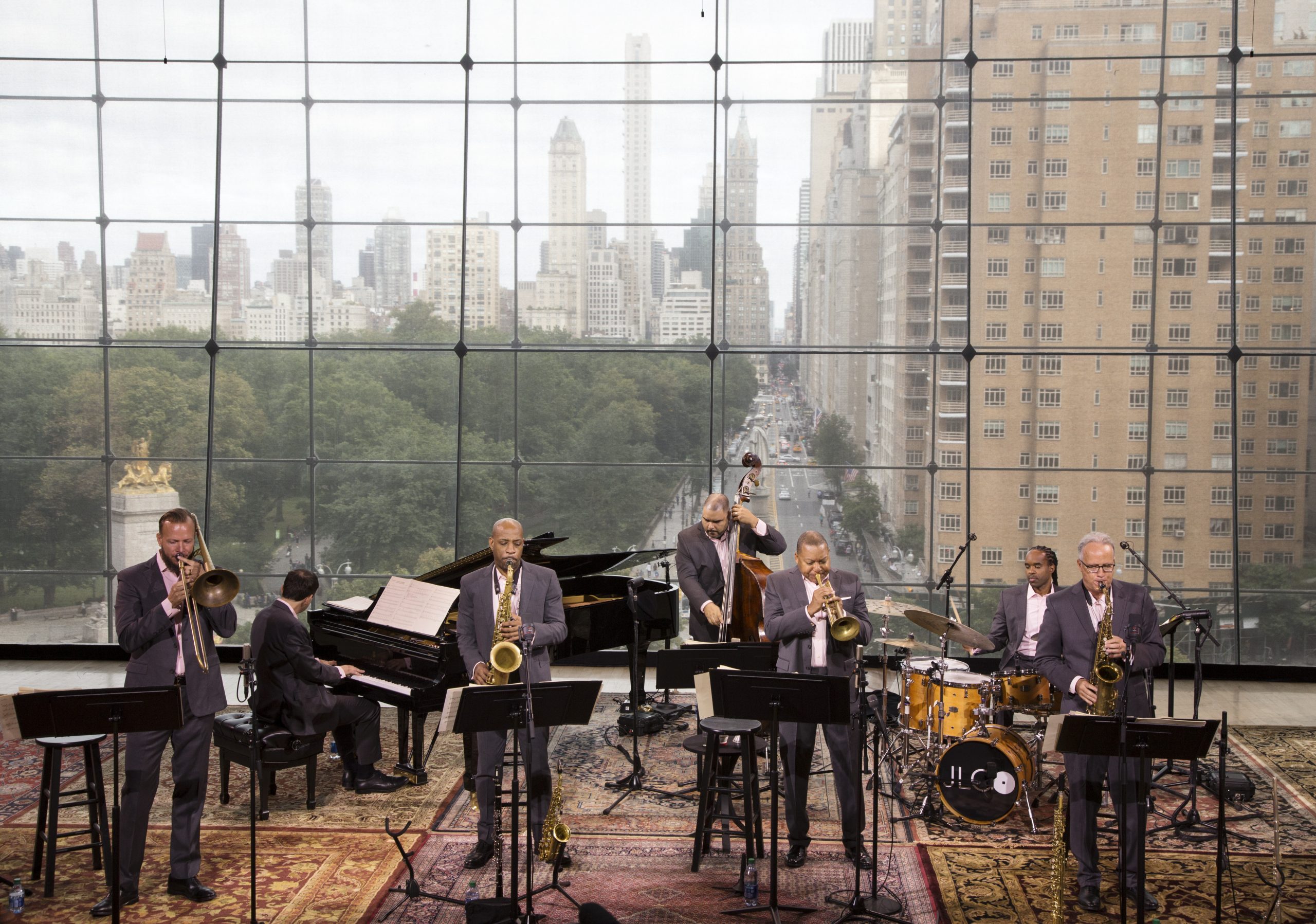 Registration for this event closed at 12 PM EST on February 25. Available on-demand for all ticketholders for 72 hours, beginning on February 25, 2021 at 7:30 PM EST.

Led by trumpeter/composer Wynton Marsalis and featuring seven of jazz’s finest soloists, the Jazz at Lincoln Center Orchestra Septet’s performance of The Democracy! Suite aims to entertain, inspire, and uplift audiences with the full vigor, vision, and depth of America’s music.

The concert’s unique repertoire celebrates jazz’s embodiment of freedom and democracy, featuring The Democracy! Suite, a new Marsalis composition written during the ongoing COVID-19 crisis as a response to the political, social, and economic struggles facing our nation. The Democracy! Suite is a swinging and stimulating instrumental rumination on the issues that have recently dominated our lives, as well as on the beauty that could emerge from a collective effort to create a better future.

Want to know more? Check out our program notes for The Democracy! Suite.

Wynton Marsalis and the full Jazz at Lincoln Center Orchestra have performed on CPA’s stage every season since Carolina Performing Arts was founded, and in this season, Marsalis and JLCO’s Septet uphold that tradition in digital form.

Runtime: approximately 50 minutes. Recording or photography of this event is not permitted. If you have questions or concerns related to accessibility, please contact us. You can also check out our livestream events guide.

This concert was filmed on September 27, 2020 at Frederick P. Rose Hall in New York City in accordance with the New York State Department of Health Interim Guidance on Media Production during the COVID-19 Emergency.

The Democracy! Suite
Wynton Marsalis, b. 1961

Be Present
Sloganize, Patronize, Realize, Revolutionize (Black Lives Matters)
Ballot Box Bounce
That Dance We Do (That You Love Too)
Deeper Than Dreams
Out Amongst the People (for J Bat)
It Come ‘Round ‘Gin
That’s When All Will See

Wynton Marsalis (Trumpet) is the managing and artistic director of Jazz at Lincoln Center and a world-renowned trumpeter and composer. Born in New Orleans, Louisiana in 1961, Marsalis began his classical training on trumpet at age 12, entered The Juilliard School at age 17, and then joined Art Blakey and the Jazz Messengers. He made his recording debut as a leader in 1982, and has since recorded more than 60 jazz and classical recordings, which have won him nine Grammy Awards. In 1983 he became the first and only artist to win both classical and jazz Grammys in the same year and repeated this feat in 1984. Marsalis is also an internationally respected teacher and spokesman for music education, and has received honorary doctorates from dozens of U.S. universities and colleges.

He has written six books; his most recent are Squeak, Rumble, Whomp! Whomp! Whomp!, illustrated by Paul Rogers and published by Candlewick Press in 2012, and Moving to Higher Ground: How Jazz Can Change Your Life with Geoffrey C. Ward, published by Random House in 2008. In 1997 Marsalis became the first jazz artist to be awarded the prestigious Pulitzer Prize in music for his oratorio Blood on the Fields, which was commissioned by Jazz at Lincoln Center. In 2001 he was appointed Messenger of Peace by Mr. Kofi Annan, Secretary-General of the United Nations, and he has also been designated cultural ambassador to the United States of America by the U.S. State Department through their CultureConnect program. Marsalis was instrumental in the Higher Ground Hurricane Relief concert, produced by Jazz at Lincoln Center. The event raised more than $3 million for the Higher Ground Relief Fund to benefit the musicians, music industry-related enterprises, and other individuals and entities from the areas in Greater New Orleans who were affected by Hurricane Katrina. Marsalis helped lead the effort to construct Jazz at Lincoln Center’s home—Frederick P. Rose Hall—the first education, performance, and broadcast facility devoted to jazz, which opened in October 2004.

About Jazz at Lincoln Center Orchestra

In 2015, Jazz at Lincoln Center announced the launch of Blue Engine Records, a new platform to make its archive of recorded concerts available to jazz audiences everywhere. The first release from Blue Engine Records, Live in Cuba, was recorded on a historic 2010 trip to Havana by the JLCO and was released in October 2015. Big Band Holidays was released in December 2015, The Abyssinian Masscame out in March 2016, The Music of John Lewis was released in March 2017, and the JLCO’s Handful of Keyscame out in September 2017. Blue Engine’s United We Swing: Best of the Jazz at Lincoln Center Galas features the Wynton Marsalis Septet and an array of special guests, with all proceeds going toward Jazz at Lincoln Center’s education initiatives. Recent album releases include 2018’s Una Noché con Ruben Blades, 2019’s Betty Carter’s The Music Never Stops, 2019’s Bolden (Official Soundtrack), composed and performed by Wynton Marsalis. Wynton Marsalis’ Swing Symphony, performed by the Jazz at Lincoln Center Orchestra and the St. Louis Symphony Orchestra conducted by David Robertson was released in July 2019. To date, 14 other recordings have been released and internationally distributed: Vitoria Suite, Portrait in Seven Shades; Congo Square, Don’t Be Afraid …The Music of Charles Mingus, A Love Supreme, All Rise, Big Train, Sweet Release & Ghost Story, Live in Swing City, Jump Start and Jazz, Blood on the Fields, They Came to Swing, The Fire of the Fundamentals, and Portraits by Ellington.

About Jazz at Lincoln Center

Jazz at Lincoln Center is dedicated to inspiring and growing audiences for jazz. With the world-renowned Jazz at Lincoln Center Orchestra and a comprehensive array of guest artists, Jazz at Lincoln Center advances a unique vision for the continued development of the art of jazz by producing a year-round schedule of performance, education, and broadcast events for audiences of all ages. These productions include concerts, national and international tours, residencies, weekly national radio programs, television broadcasts, recordings, publications, an annual high school jazz band competition and festival, a band director academy, jazz appreciation curricula for students, music publishing, children’s concerts and classes, lectures, adult education courses, student and educator workshops, a record label, and interactive websites. Under the leadership of Managing and Artistic Director Wynton Marsalis, Chairman Clarence Otis, and Executive Director Greg Scholl, Jazz at Lincoln Center produces thousands of events each season in its home in New York City, Frederick P. Rose Hall, and around the world. For more information, visit jazz.org.