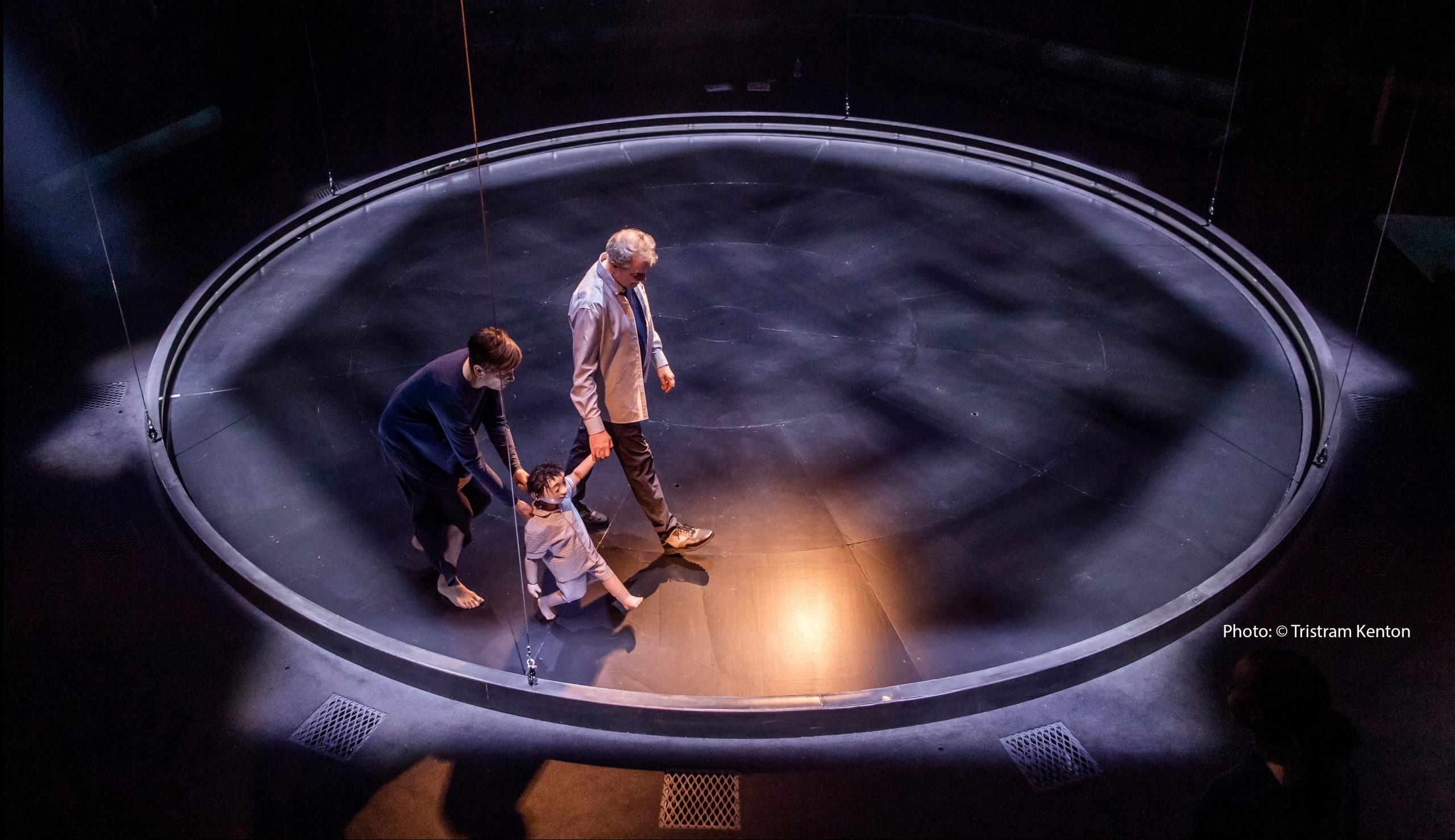 Tao of Glass is a partly autobiographical play from the great actor, puppeteer, and director Phelim McDermott and the New York composer Philip Glass. For decades, McDermott has been engaged with the works of the inventor of minimal music whose music has been a source of inspiration.

Philip Glass is undoubtedly one of the most important and influential musicians and composers of the present day, who, starting in the US, shaped the musical avant-garde of the second half of the 20th century. Phelim McDermott has staged several of his operas in highly acclaimed productions, most recently for the English National Opera in London and the Metropolitan Opera in New York.

For Tao of Glass, an intensely personal stage meditation on the power and influence of Glass’s music, the 86-year-old has composed ten new pieces for the most personal collaboration between the two artists yet. In it, they address the end of life as well as its beginning with wit and coarseness. Here, the wisdom of Taoism meets the findings of psychology. A funny, sad, warm, and all-embracing evening that accomplishes one thing above all: It celebrates the power of theatre.

“Every so often your eyes will fill with tears, for there is only so much that the human heart can hold within it.”

Save 20% on our four-performance theater package:

Gold, Premium and Zone A packages starting at $103

ABOUT TAO OF GLASS

An exploration of life, loss, and a single question: Where does true inspiration come from?

Composer Philip Glass and performer/director Phelim McDermott (Improbable) have worked together on acclaimed opera productions in London, New York and beyond, and Tao of Glass is their most personal collaboration yet. Inspired by a dream, this world premiere marries ten meditations on life, death, and Taoist wisdom with ten brand new pieces of music from Glass, presented by McDermott with an ensemble of musicians and puppeteers.

Part concert, part performance, Tao of Glass is a storytelling tapestry, soundtracked by Glass’s mesmerising music and shot through with Improbable’s trademark theatricality.

Born in Baltimore, Maryland, Philip Glass is a graduate of the University of Chicago and the Juilliard School. In the early 1960s, Glass spent two years of intensive study in Paris with Nadia Boulanger and, while there, earned money by transcribing Ravi Shankar’s Indian music into Western notation. By 1974, Glass had a number of innovative projects creating a large collection of new music for The Philip Glass Ensemble and for the Mabou Mines Theater Company. This period culminated in Music in Twelve Parts and the landmark opera Einstein on the Beach, for which he collaborated with Robert Wilson. Since Einstein, Glass has expanded his repertoire to include music for opera, dance, theater, chamber ensemble, orchestra, and film. His scores have received Academy Award nominations (“Kundun,” “The Hours,” “Notes on a Scandal”), and a Golden Globe (“The Truman Show”). Glass’s memoir “Words Without Music” was published by Liveright Books in 2015.

Glass received the Praemium Imperiale in 2012, the U.S. National Medal of the Arts from President Barack Obama in 2016, and 41st Kennedy Center Honors in 2018. Glass’s recent works include a circus opera Circus Days and Nights, Symphony No. 13, and Symphony No 14.

Opera credits include: Philip Glass’s Satyagraha (ENO, LA Opera); The Perfect American; the Olivier Award-winning Akhnaten; Mozart’s Così fan tutte (ENO and Metropolitan Opera, NY); Aida (ENO) and; and BambinO, an opera for babies (co-produced with Manchester International Festival and Scottish Opera). This year he will be directing a new adaptation of “The Hours” at the Metropolitan Opera, NY.

In 2003 Phelim was awarded a National Endowment for Scient, Technology and the Arts (NESTA) fellowship to research new ways of rehearsing and creating theatre using improvisation and process-oriented conflict facilitation techniques. As part of this work he has facilitated many Open Space Technology events. He was made an Honorary Doctor of Middlesex University in 2007.

Kirsty Housley is a director, writer and dramaturg. She won the Oxford Samuel Beckett Theatre Trust Award in 2003 for Cue Deadly: A Live Film Project and was twice nominated for the stage award for innovation (winning in 2017 for The Encounter).

Other work at Perth Festival: The Encounter (Complicite: Co-director with Simon McBurney) and I‘m a Phoenix, Bitch (co-director with Bryony Kimmings)

Work includes Mephisto (A Rhapsody) at The Gate Theatre; Rich Kids: A History of Shopping Malls in Tehran at The Traverse, HOME Manchester and BAC (co-created with Javaad Alipoor); Avalanche: A Love Story at The Barbican and Sydney Theatre (Dramaturg); Misty at The Bush and the West End (dramaturg); Myth at the RSC (co-written with Matt Hartley); A Pacifist’s Guide to the War on Cancer for Complicite at the National Theatre and HOME Manchester (as dramaturg in 2017, and as writer director on 2018 international tour); Wanted and 9 for Chris Goode and Company, Transform Festival and West Yorkshire Playhouse (co-director); Walking the Tightrope for Offstage and Theatre Uncut; All I Want for Live Theatre, Leeds Libraries and Jackson’s Lane; Mass for Amy Mason at Bristol Old Vic and Camden Peoples Theatre; The Beauty Project and Theatre Uncut 2012 at the Young Vic; How to be Immortal for Penny Dreadful at the Soho and on tour; Bandages at the Corn Exchange Newbury and on tour; Thirsty for The Paper Birds; and Blue Jam for Etcetera Theatre Company.