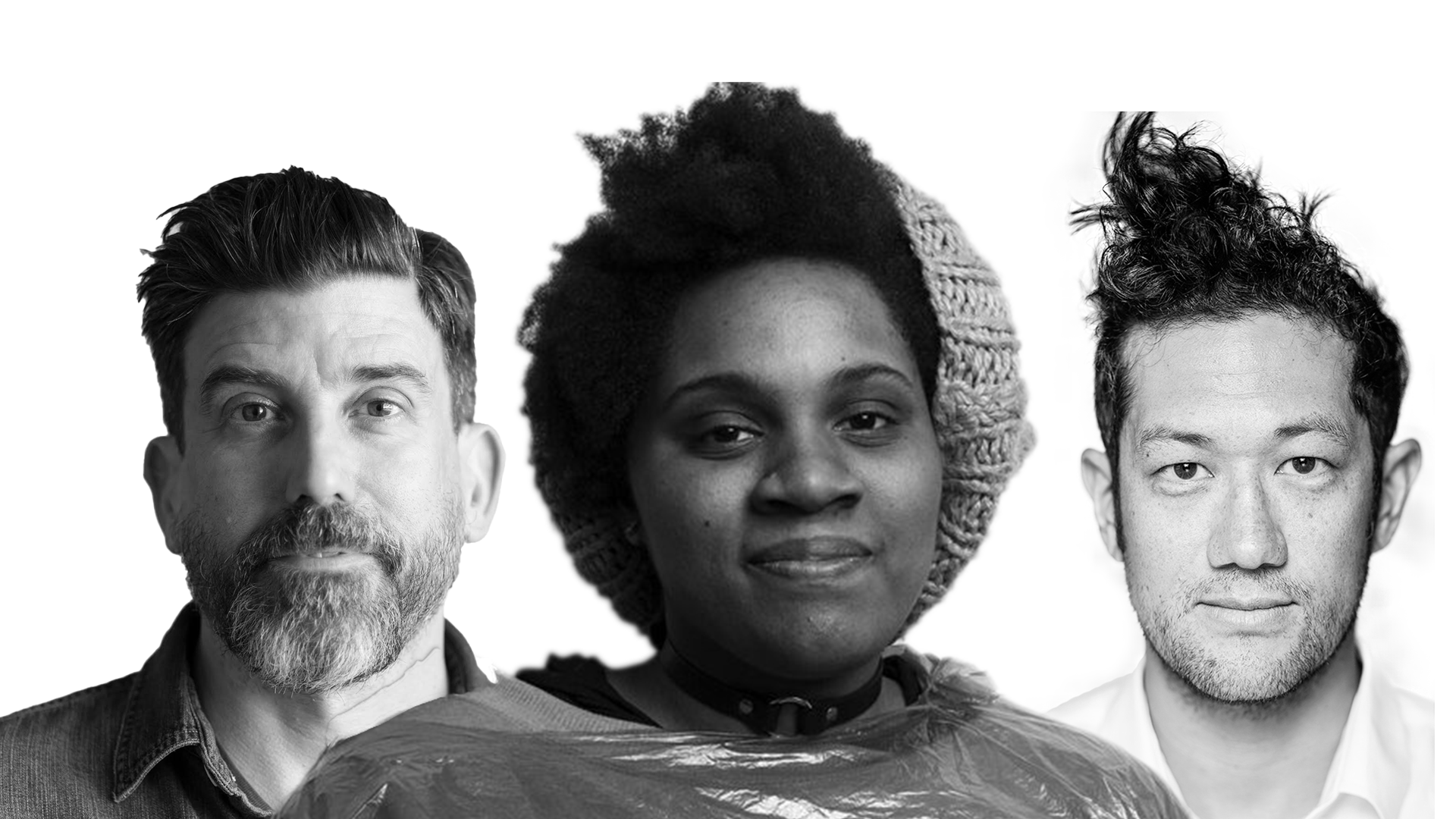 Primer for an Impossible Conversation

Suggested ticket donation (per household) is $15. Tickets available starting at $0. Available on-demand for all ticketholders for 72 hours, beginning on November 5, 2021 at 7:30 PM EDT.

Primer for an Impossible Conversation is an online performance work that examines race, privilege, and science fiction through a vulnerable, serious, sometimes humorous conversation.

Continuing to unpack their years-long conversation around race, theater artists Marcella Murray and David Neumann, alongside collaborator Tei Blow, weave imagery, short bursts of dance, and the digitized distance we’re all experiencing into a new online theater work, Primer for an Impossible Conversation.

Primer is a step-by-step non-instruction manual revealing the efforts needed for two people to be in the same place at the same time. The work emerges from the need to continue this conversation as a creative act, adapting and responding to the artists’ Obie Award-winning Distances Smaller Than This Are Not Confirmed, a piece made for the stage by Marcella and David which premiered at Abrons Arts Center in January 2020. (And now, doesn’t January 2020 feel like years ago?)

I do find myself learning more about how I have internalized the current systems and expectations. I am unable to accept the imbalances with the same unawareness that I once did. As we work, the cost of it becomes clearer and makes obvious what must change.

As Marcella and David hurtle through space, they are faced not only with the challenge of having a conversation from their prospective experiences (she’s Black, he’s white), but also with the difficulties inherent in connecting over online platforms while quarantined from in-person exchanges during Covid.

Primer for an Impossible Conversation hopes to engage the community that attends the online event in meaningful efforts towards understanding, while navigating uncharted territories and the well-trod paths, across an unfathomable expanse full of terrors, mysteries, discoveries, and wonder.

Runtime: approximately 75 minutes. Recording or photography of this event is not permitted. If you have questions or concerns related to accessibility, please contact us. You can also check out our livestream events guide.

ABG has also performed at the Walker Art Center; Carolina Presents; Alverno College; MASS MoCA; The Fusebox Festival; The Ringling International Arts Festival, and the American Dance Institute/Lumberyard, among others.

Marcella Murray (co-creator and performer) is a New York-based theater artist from Augusta, Georgia. She is a playwright, performer, collaborator, and puppeteer. Murray’s work is heavily inspired by the observed ways in which people tend to segregate and reconnect. Her work tends to focus on themes of identity within a community and (hopefully) forward momentum in the face of trauma.

Performances include The Slow Room, a piece directed by Annie Dorsen at Performance Space New York; a workshop of Ocean Filibuster which was co-created by the team Pearl D’Amour (Lisa D’Amour and Katie Pearl) with composer Sxip Shirey at Abrons Arts Center; the work-in-progress I Don’t Want to Interrupt You Guys, created in collaboration with Leonie Bell and Hyung Seok Jeon during RAP at Mabou Mines; New Mony created by Maria Camia at Dixon Place; and Shoot Don’t Talk at St. Ann’s Warehouse/Puppet Lab created by Andrew Murdock.

Along with David Neumann, Murray recently co-created Distances Smaller Than This Are Not Confirmed (Obie Special Citation for Creation and Performance) which opened at Abrons Arts Center in January of 2020. Murray is part of an artist collective called The Midwives.

Tei Blow (co-creator, he/him) is a media designer and performer based in Brooklyn, NY. Tei’s work incorporates photography, video, and sound culled from found materials and mass media alongside live instrumentation. He performs music as Frustrator on Enemies List Recordings and is one half of Royal Osiris Karaoke Ensemble. He has performed and designed for The Laboratory of Dmitry Krymov, Mikhail Baryshnikov, Jodi Melnick, Big Dance Theater, David Neumann/Advanced Beginner Group.

Tei’s work has been featured at Hartford Stage, Dance Theater Workshop, PS122/PSNY, Lincoln Center Festival, The Kitchen, BAM, The Public Theater, The Broad Stage, MCA Chicago, MFA Boston, Kate Werble Gallery, Baryshnikov Arts Center, The Roundabout, The Wadsworth Atheneum, and at theaters around the world. He is the recipient of a 2015 New York Dance and Performance “Bessie” Award for Outstanding Sound Design for David Neumann/Advanced Beginner Group’s “I Understand Everything Better”. Tei is one half of Royal Osiris Karaoke Ensemble, whose ongoing multipart series “The Art of Luv” is a recipient of the Creative Capital and Franklin Furnace Awards. Tei is currently a Baryshnikov Arts Center Cage/Cunningham Fellow.

Hyung Seok Jeon (guest appearance) is a South Korean multi-disciplinary theatre artist based in NYC. He also works as a videographer, film-editor. In 2014, Jeon’s video work, including his short film Autumn (2014), was installed by the artistic director Robert Wilson at the Watermill Center Annual Benefit. In 2016, he performed in a dance puppetry piece, Tough the Tough (Redux: Steve), directed by David Neumann. In 2017, he created and performed in How a River Carries You as a part of Puppet Blok 2017 at Dixon Place. 2018, he created and performed a solo piece A Held Posture at Theatre Lab, a meditation on generational loss in relation to the sensation of sinking into deep water. He is a recipient of a 2015 Fulbright graduate study award. He graduated from Sarah Lawrence College in 2017 with an MFA in Theatre.

Julius Powell / Julie J (guest appearance) is a New York City based performer, writer, and drag artist. They have performed in various theaters in New York City including Ensemble Studio Theater, TADA Theater, The Dixon Place, The Secret Theater, Hudson Guild Theater, and The Acorn Theater (Off-Broadway) and Abrons Arts Center. Internationally they have performed at Spazio ZUT!, La Mama Umbria, and in the 2019 Prague Fringe Festival. Julius’ created work focuses on cultural insertion, relationships between history and identity, and the tactics of escape utilized by marginalized bodies. They are currently developing work that combines drag performance, dance, and experimental modes of storytelling. They are a graduate of Sarah Lawrence College and have studied at Upright Citizens Brigade and La Mama Umbria’s Directors Symposium.  In January 2021 their episodic drag show FAULTY DEFENSE MECHANISMS premiered in the digital ether, or in layman’s terms, on YouTube. More information on their work can be found at juliejnyc.com and on various social media platforms @juliej.nyc

Previously, Froebel served as producer of Lincoln Center Festival and The Onassis Festival; executive producer of the Imagine Festival of Arts, Issues & Ideas (OBIE Award); curator/producer of live art at The Whitney Museum; and artistic director of Galapagos Art Space (OBIE Award). Froebel has nominated, evaluated, and served on panels for foundations and cultural councils including Creative Capital, the CalArts Alpert Award, US Artists International, Foundation for Contemporary Arts, the Lambent Foundation, the French Cultural Services, and the MAP Fund. She is a member of The Blacksmiths collective, and sits on the boards of Movement Research and The Poetry Project.

Advanced Beginner Group (ABG) is a collection of artists across many disciplines and approaches that come together for specific performance projects such as Distances Smaller Than This Are Not Confirmed (winner Obie Award), I Understand Everything Better (winner, Bessie- Award), and Big Eater. Advanced Beginner Group makes work that is at its core an irrational response to our perceived place in the universe. Advanced Beginner Group makes pieces from scratch, bringing to word, action, and proximity a delighted embrace of our contradictory lives. Words and actions can only point to experience. The collection of artists actively attempts to create experiences that are difficult to describe. ABG’s most recent work Distances Smaller Than This Are Not Confirmed premiered in January 2020, co-created by David Neumann and Marcella Murray, co-commissioned and co-presented by Abrons Arts Center and the Chocolate Factory Theater, and associate-produced by Mabou Mines. www.advancedbeginnergroup.org

Images from “How to Stage Your Show Without Being Super Racist” by Makoto Hirano are used with permission of the artist.

Original images from Distances Smaller Than This Are Not Confirmed used in Primer were taken by Peter Richards.

Support for the Artists
Primer for an Impossible Conversation has been co-commissioned by MCA Chicago and the Wisconsin Union Theater at the University of Wisconsin-Madison, with additional major support from the David and Leni Moore Foundation. A complete donor list may be found on www.advancedbeginnergroup.org.

“Caste: The Origins of Our Discontents” by Isabel Wilkerson

Resmaa Menakem (Somatic Abolitionism), plus his other books

People’s Institute for Survival and Beyond