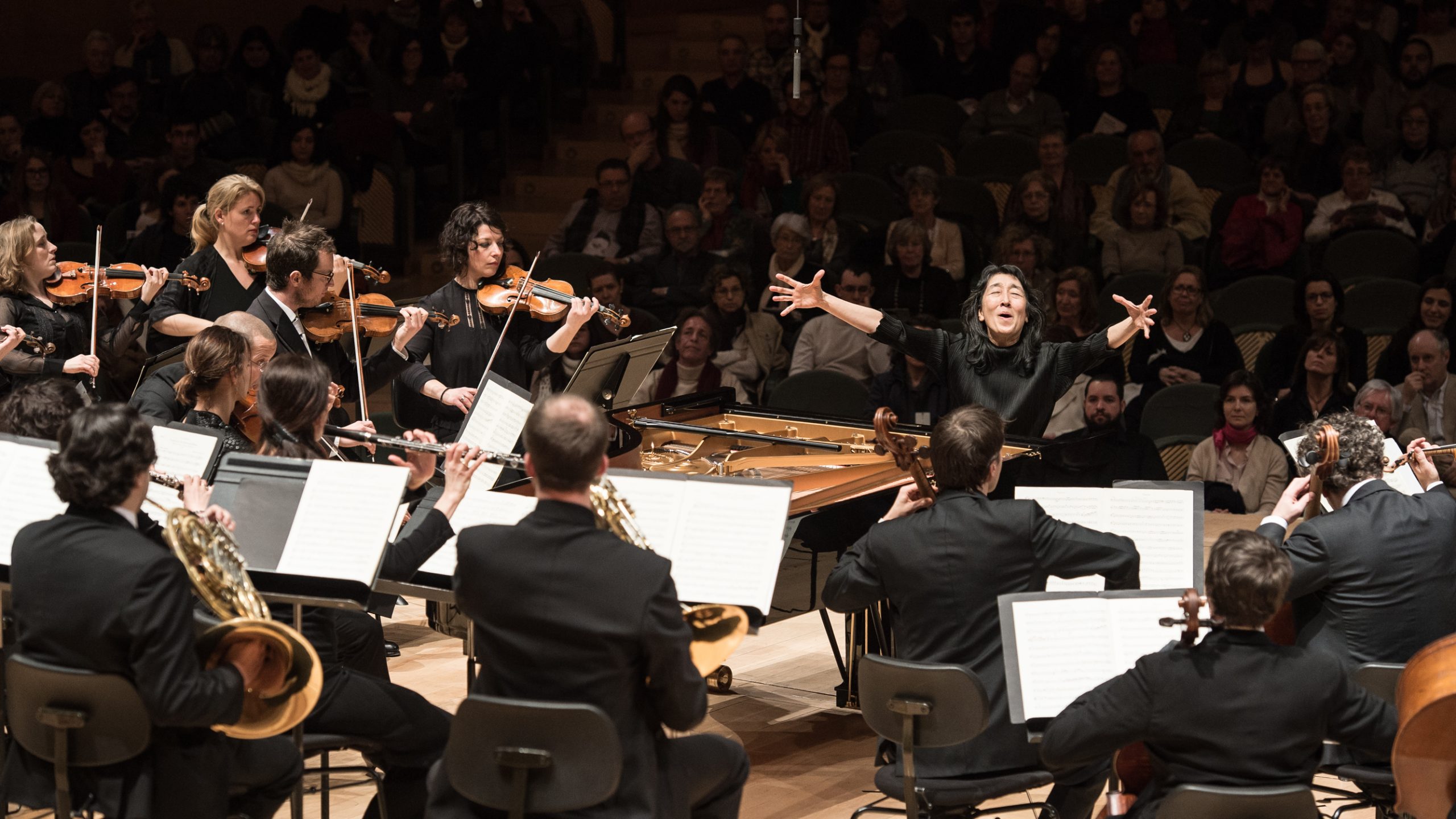 Founded in 1997 based on the shared vision of being a free and international ensemble, the Mahler Chamber Orchestra is dedicated to creating and sharing exceptional experiences in classical music. Committed to excellence, its musicians are unafraid of taking risks. The MCO’s core repertoire, ranging from the Viennese classical and early Romantic periods to contemporary pieces and world premieres, reflects the orchestra’s agility in crossing musical boundaries.

Joining them for this performance is the legendary pianist Mitsuko Uchida, who brings a deep insight into the music she plays through her own quest for truth and beauty. Renowned for her interpretations of Mozart, Schubert, Schumann, and Beethoven, she has also illuminated the music of Berg, Schoenberg, Webern, and Boulez for a new generation of listeners. She regularly performs with the world’s most respected orchestras—including the Cleveland Orchestra, Chicago Symphony, Berlin Philharmonic, Bayerischer Rundfunk, and London Symphony. This is her fifth appearance at Carolina Performing Arts.

NOTE: Late seating opportunities for this event are very limited.

Purcell’s Fantasias serve as a great, final hurrah capping the fertile era of viol consort music. The ensemble had already fallen out of fashion at the time these works were penned, having ceded popularity to the instruments of the violin family and their greater carrying power. This represents a great loss in the history of musical performance, as the reedy, plaintive voice of the viols evinces poignant flexibility of nuance, the blend of consort instruments offering unparalleled, unctuous richness. Often the opening of the chest of viols was an invitation to an evening of music making amongst friends, convivial and intimate. In spirit and perhaps in timbre the closest modern institution to the consort is the string quartet. A translation of these works into a version for the expanded string quartet of the string orchestra seems apt, beautiful and potent, collaborating with the resonance of the concert hall without ceding the sense of close rapport. We aim to draw our audience into the parlor, to invite our listeners to consort with us.

Clearly the viol consort ignited the young Purcell’s heart and imagination. These pieces are, as the title indicates, filled with fantasy, with mercurial shifts of mood. They both lament and frolic, wail and playfully scurry. They seem to explore the boundary between private and public music, now on this side, now on that, slipping from one to the other with guileless naturalness. At times the seamless blending of the parts into an iridescent tapestry offers luxurious comfort; at others, confrontations between parts provoke a visceral thrill. Particularly exciting are the wild dissonances that blossom in the texture, each with its own special frisson.  There are moments when a pleading dissonance, poised to resolve, instead slips into one even more spicy and anguished. In the spirit of a great massage, these harmonies hurt in the most delicious way and give us a sense of the physicality of musical discourse. Imitations and reflections abound; the music delights in intimate intertwinings, a sense of sensuality cloaked in geometry. Conversation and collision, friendliness and frictions. The world of the viol consort is replete with wit, melancholic sighs, dance and despair, and, above all, the pleasures of keeping company with kindred souls.

About the Mahler Chamber Orchestra

The Mahler Chamber Orchestra (MCO) was founded in 1997 based on the shared vision of being a free
and international ensemble, dedicated to creating and sharing exceptional experiences in classical music. With 45 members spanning 20 different countries at its core, the MCO works as a nomadic collective of passionate musicians uniting for specific tours in Europe and across the world. The orchestra is constantly on the move: it has, to date, performed in over 40 countries across five continents. It is governed collectively by its management team and orchestra board; decisions are made democratically with the participation of all musicians.

MCO’s sound is characterized by the chamber music style of ensemble playing among its alert and distinct musical personalities. Committed to excellence, its musicians are unafraid of taking risks. The MCO’s core repertoire, ranging from the Viennese classical and early Romantic periods to contemporary pieces and world premieres, reflects the orchestra’s agility in crossing musical boundaries.

The MCO musicians’ engagement with their audiences include Feel the Music which opens the world of music to deaf and hard-of-hearing children through workshops in schools and concert halls. Through the MCO Academy, the orchestra works with young musicians to provide a high quality orchestral experience and a unique platform for international exchange.

MCO commenced its 2021/22 Global Season with its annual residency at Lucerne Festival, performing with Yuja Wang, followed by the world premiere of George Benjamin’s Concerto for Orchestra at the BBC Proms. Immersing listeners in Mozart’s two most creative years, Leif Ove Andsnes reunited with MCO after their acclaimed album Mozart Momentum 1785 (Sony Classical).

With Mitsuko Uchida MCO will tour across Europe and from one U.S. coastline to the other. The season also finds Igor Levit, Alina Ibragimova and Elim Chan making their debuts. MCO will present Les Adieux with Patricia Kopatchinskaja, showcasing visceral concert staging, and unveil pioneering new technologies that transform listeners’ encounters with recorded performances into even more intimate and inspiring experiences.

One of most revered artists of our time, Mitsuko Uchida is known as a peerless interpreter of the works of Mozart, Schubert, Schumann and Beethoven, as well as being a devotee of the piano music of Alban Berg, Arnold Schoenberg, Anton Webern, and György Kurtág.

She has enjoyed close relationships over many years with the world’s most renowned orchestras, including the Berlin Philharmonic, Royal Royal Concertgebouw Orchestra, Bavarian Radio Symphony, London Symphony Orchestra, London Philharmonic Orchestra, and — in the U.S. — the Chicago Symphony and The Cleveland Orchestra, with whom she recently celebrated her 100th performance at Severance Hall. Conductors with whom she has worked closely have included Bernard Haitink, Sir Simon Rattle, Riccardo Muti, Esa-Pekka Salonen, Vladimir Jurowski, Andris Nelsons, Gustavo Dudamel, and Mariss Jansons.

Since 2016, Mitsuko Uchida has been an Artistic Partner of the Mahler Chamber Orchestra, with whom she is currently engaged on a multi-season touring project in Europe, Japan and North America. She also appears regularly in recital in Vienna, Berlin, Paris, Amsterdam, London, New York and Tokyo, and is a frequent guest at the Salzburg Mozartwoche and Salzburg Festival.

Mitsuko Uchida records exclusively for Decca, and her multi-award-winning discography includes the complete Mozart and Schubert piano sonatas. She is the recipient of two Grammy® Awards — for Mozart Concertos with The Cleveland Orchestra, and for an album of lieder with Dorothea Röschmann — and her recording of the Schoenberg Piano Concerto with Pierre Boulez and the Cleveland Orchestra won the Gramophone Award for Best Concerto.

A founding member of the Borletti-Buitoni Trust and Director of Marlboro Music Festival, Mitsuko Uchida is a recipient of the Golden Mozart Medal from the Salzburg Mozarteum, and the Praemium Imperiale from the Japan Art Association. She has also been awarded the Gold Medal of the Royal Philharmonic Society and the Wigmore Hall Medal, and holds Honorary Degrees from the Universities of Oxford and Cambridge. In 2009, she was made a Dame Commander of the Order of the British Empire.

Mark Steinberg is first violinist and founding member of the Brentano Quartet, in existence since 1992. With the quartet he has performed extensively in North America, Europe, Australia and New Zealand, as well as in Japan, China, Korea, Israel and Colombia.

The quartet is ensemble in residence at Yale University, has recorded extensively, and has won many awards, such as the Naumburg Chamber Music Award, the inaugural Cleveland Quartet award and the Royal Philharmonic Society award for best debut in the U.K.

Steinberg has appeared often in trio and duo concerts with pianist Mitsuko Uchida, with whom he presented the complete Mozart sonata cycle in London’s Wigmore Hall in 2001, with additional recitals in other cities. With Mitsuko Uchida he has also recorded a group of Mozart sonatas for Philips.

Mr. Steinberg has been soloist with the London Philharmonia, the Los Angeles Philharmonic, the Kansas City Camerata, the Auckland Philharmonia, and the Philadelphia Concerto Soloists, with conductors such as Kurt Sanderling, Esa-Pekka Salonen and Miguel Harth-Bedoya.

Mark Steinberg holds degrees from Indiana University and The Juilliard School and has studied with Louise Behrend, Josef Gingold, and Robert Mann. He is currently on the violin faculties of the Manhattan School of Music, and CUNY The Graduate Center.

Steinberg has been on quartet competition juries at the Banff International Quartet Competition, the London Quartet Competition, and twice at the Mozart International Quartet Competition in Salzburg as well as the Naumburg Violin Competition. He has taught often at the Banff Centre for the Arts, the Aspen Festival, Norfolk Chamber Music Festival, and the Taos School of Music and has given master classes at the Eastman School of Music, the Cleveland Institute of Music, the Britten-Pears Institute in Aldeburgh, England, the Mozarteum in Salzburg, the Guildhall School, the Amsterdam Conservatory, Yellow Barn, and numerous other schools.