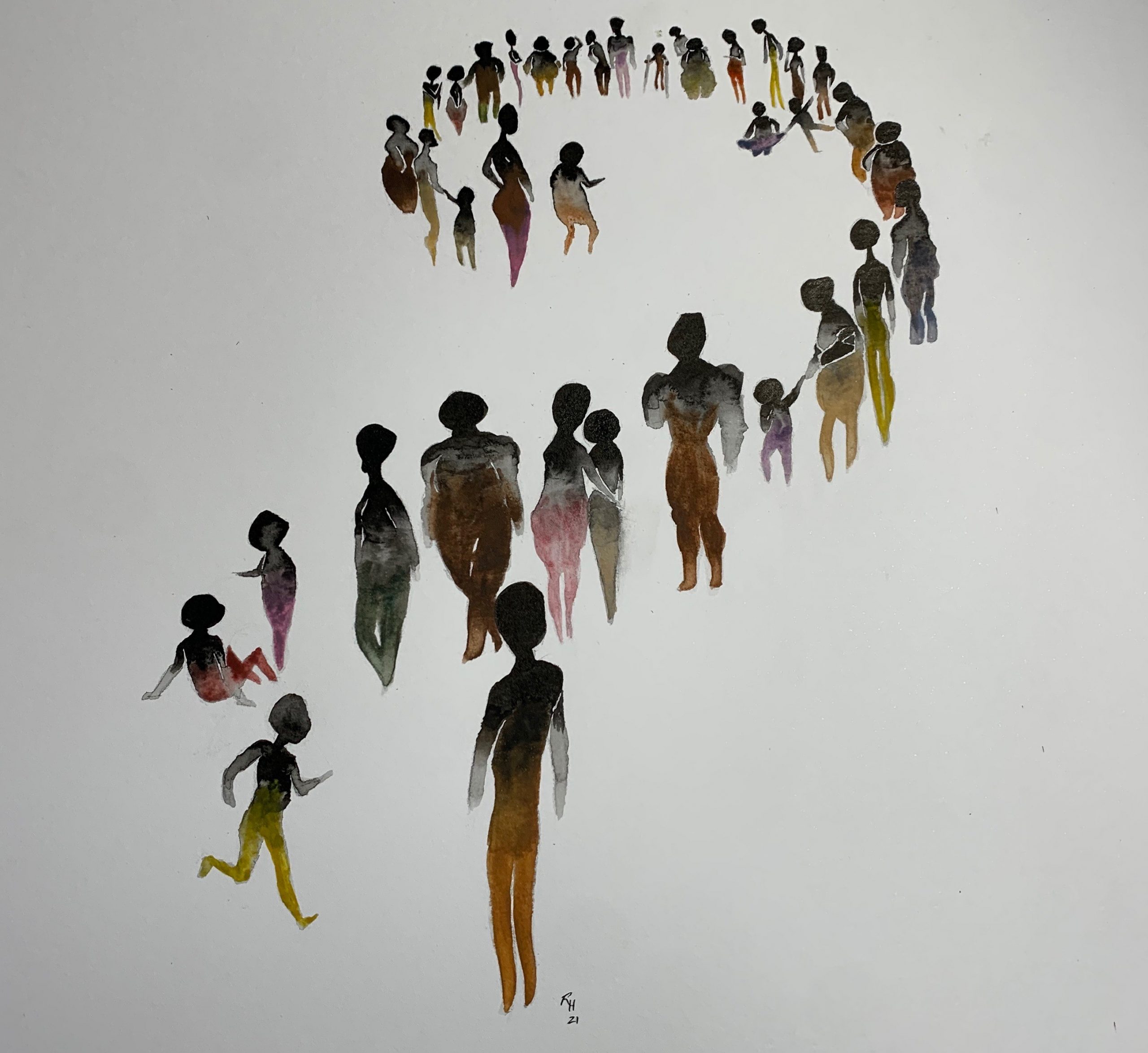 Culture Mill brings together audiences and professional artists to build an imaginary monument for a (im)possible “we.” Just before sundown, you are invited to join a choreographic practice outside CURRENT ArtSpace + Studio, which uses restorative justice practices and embodiment tools to investigate how our assembled bodies and stories might form the architecture for a togetherness we don’t yet know.

“Knowledge is only a rumor until it lives in the bones.” So goes a proverb of the Asaro Tribe of Papau New Guinea. In our current global moment, democracy, too, feels increasingly such a rumor whose complexities are not fully practiced and lived together in assembled bodies and their accompanying memories and histories.

Presented as part of the Southern Futures initiative at CPA, Eclipse is a performance of this embodied social practice at the core of democracy.

Eclipse aims to create a ritual practice…in which a larger public is invited to temporarily eclipse the power projected by our public spaces, and instead practice the rumor of complex assembly and belonging through bodies and bones.

Tommy Noonan of Culture Mill in an artist statement about Eclipse

As a site-specific work, Eclipse incorporates material elements of UNC-Chapel Hill’s history. Culture Mill’s Noonan, Elizéon and their collaborators have drawn upon images from UNC’s Wilson Library and audio stories from The Southern Oral History Program in their creation of this new work. See a detailed list of these sources here.

Located on the green outside CURRENT ArtSpace + Studio. Runtime is approximately 90 minutes. For current health and safety information and more, visit our FAQ page.

This presentation is supported in part by the Robert and Mercedes Eichholz Foundation.

Culture Mill, Inc. is a 2020 NDP Finalist Grant Award recipient. Support was made possible by the New England Foundation for the Arts with funding from the Doris Duke Charitable Foundation and the Andrew W. Mellon Foundation to address sustainability needs during COVID-19 and in support of Eclipse.

Culture Mill is a performing arts laboratory based in Saxapahaw, NC that aims to create a rich artistic ecosystem in rural North Carolina through the cross-pollination of artist residencies, educational outreach and groundbreaking immersive artworks from local, national and international artists. More at www.culturemill.org.

Tommy Noonan is a director, choreographer, writer, and performer currently based in Saxapahaw, NC. His work has been presented throughout Europe and North America. He has collaborated in contemporary dance, installation, theater, and performance practices with Stephanie Thiersch, Tom Schneider, Mia Habib, Murielle Elizéon, Joachim Schlömer, and Pieter Ampe, among others.

His research and work in public space performance with Georg Hobmeier took place between Argentina, Germany and Austria, and their conversations on performance and public space have appeared in the acclaimed: “Guidebook of Alternative Nows.”

Tommy recently collaborated with Okwui Okpokwasili through the Carolina Performing Arts Creative Futures fellowship and with Australia’s The Farm in their creation of Food Chain, which premiered in Australia’s Sydney Festival.

As a choreographer/director, Noonan created The Engagement for the Maxim Gorki Theater’s Heinrich von Kleist festival in Berlin and has toured his smaller performances such as Wilderness, Tout Court, What Doesn’t Work, and Brother Brother in more than 70 performances and 8 countries. Most recently, he and Murielle Elizéon were commissioned by the American Dance Festival to create: They Are All as a part of ADF’s 2019 Summer season, and is currently working on a new solo in collaboration with Mia Habib Productions in Bergen, Norway. Tommy regularly teaches classes and workshops both internationally as well as locally in North Carolina, where he is increasingly committed to exploring creative practice as a means of embodied social and ecological justice.

Murielle Elizéon is a French choreographer, performer, teaching artist, and creative community connector. She was born and raised in a multiracial family in an underserved community in South of France and studied contemporary dance and dance pedagogy. She has performed and toured with various companies (T. Lebrun, Palle Granhoj, Joachim Schlomer) in France, Denmark, Switzerland, and Germany.

Since 2014, she has co-led Culture Mill with Tommy Noonan, a performing arts laboratory based in Saxapahaw, NC, which strives to create connective social tissue through creative place making, cross-pollination of artists residencies, and community partnerships. Recently, her work as a choreographer has included commissions from the American Dance Festival and the North Carolina Museum of Art and has been seen across Europe. She is committed to using creative process and embodied practices to unearth our potential for transformation at individual, relational, and communal levels and strives to develop performances as contemporary rituals where performers and participants can experience their shared humanity. She initiates collaborations that weave together artistic embodied practices with non-arts sectors such as health/sciences (Duke Movement Disorders) and restorative/social justice (Dispute Settlement Center, Saxapahaw Social Justice Exchange).

Val Hanson (Project Development and Facilitation) integrates her passion for conflict transformation by helping educators, organizations, and community members learn about and utilize Restorative Practices. Restorative Practices strengthen relationships, deepen engagement of stakeholders, and when needed, assist to repair harm. Val has trained and facilitated across North Carolina, and also teaches Restorative Justice at Guilford College. After ten years in the business sector, Val attended NCCU School of Law to earn her J.D. and Certificate in Dispute Resolution. Since 2012, she has been practicing Alternative Dispute Resolution with a focus on Restorative Practices. Val has been awarded the NC Dispute Resolution award for Achievement in Mediation and the NC Bar Association for Commitment to Public Service.

CJ Suitt (Project Development and Facilitation) is the poet laureate of Chapel Hill, NC. He is a performance poet, arts educator, and community organizer whose work is rooted in storytelling and social justice. He is committed to speaking truth to power and aims to be a bridge for communities who can’t always see themselves in each other. Suitt is making a long-awaited move into full-time artistry to facilitate dialogue in spaces that are often dominated by fear-driven stereotypes. He is the co-creator of the podcast Sitting in the Intersection, which explores the radical nature of relationships across differences.

Sarah Marguier (Costume, Setting and Visual Design) is a French artist, currently based in the Pacific Northwest while creating and presenting work internationally. She works as a photographer and as a designer for performing arts, among other mediums. Her work centers around the expressions of the moving body, the ever-evolving stories and encounters that emerge from it, what remains of these stories and the textures of their memory(ies). Polyamorous in art, she works within a hybrid artistic approach, which she describes as an archipelago: a myriad of permeable and creative ecosystems that nourish and inform each medium. She has worked as a photographer, designer, and artistic collaborator on many creative processes.

Carl Faber (Lighting Design) is a Los Angeles-born, Portland-based Artist and (typically Lighting) Designer for theater, music, dance, opera, and immersive experiences, focusing primarily on the intersection of technology and creativity in the arts. The breadth of his professional experience has ranged from creating a 53-room site-responsive environment, to programming moving lights for cruise ships, to assisting on Broadway musicals, to touring accounting and logistical analysis, to IT network and database management. He has collaborated with theaters, companies, directors, choreographers, and visual artists across the United States, Europe, and Asia, including recent designs with Portland Center Stage, Portland Opera, Artists Repertory Theatre, Oklahoma Contemporary, American Dance Festival, Williamstown Theatre Festival, Profile Theatre, Third Rail Repertory, Ars Nova, Theater Freiburg, Non-Stop Wroclaw, and Eaux Claires Festival. Carl has toured extensively with Bruce Springsteen & The E Street Band, Bon Iver and The National and has served as the Co-Lighting Supervisor at the Williamstown Theatre Festival (Artistic Director Nicholas Martin) in 2008 and 2009. He is a three-time Drammy Award winner for his designs of Beehive (2017), Trails (2018), and Ordinary Days (2019), for Broadway Rose Theatre Company.