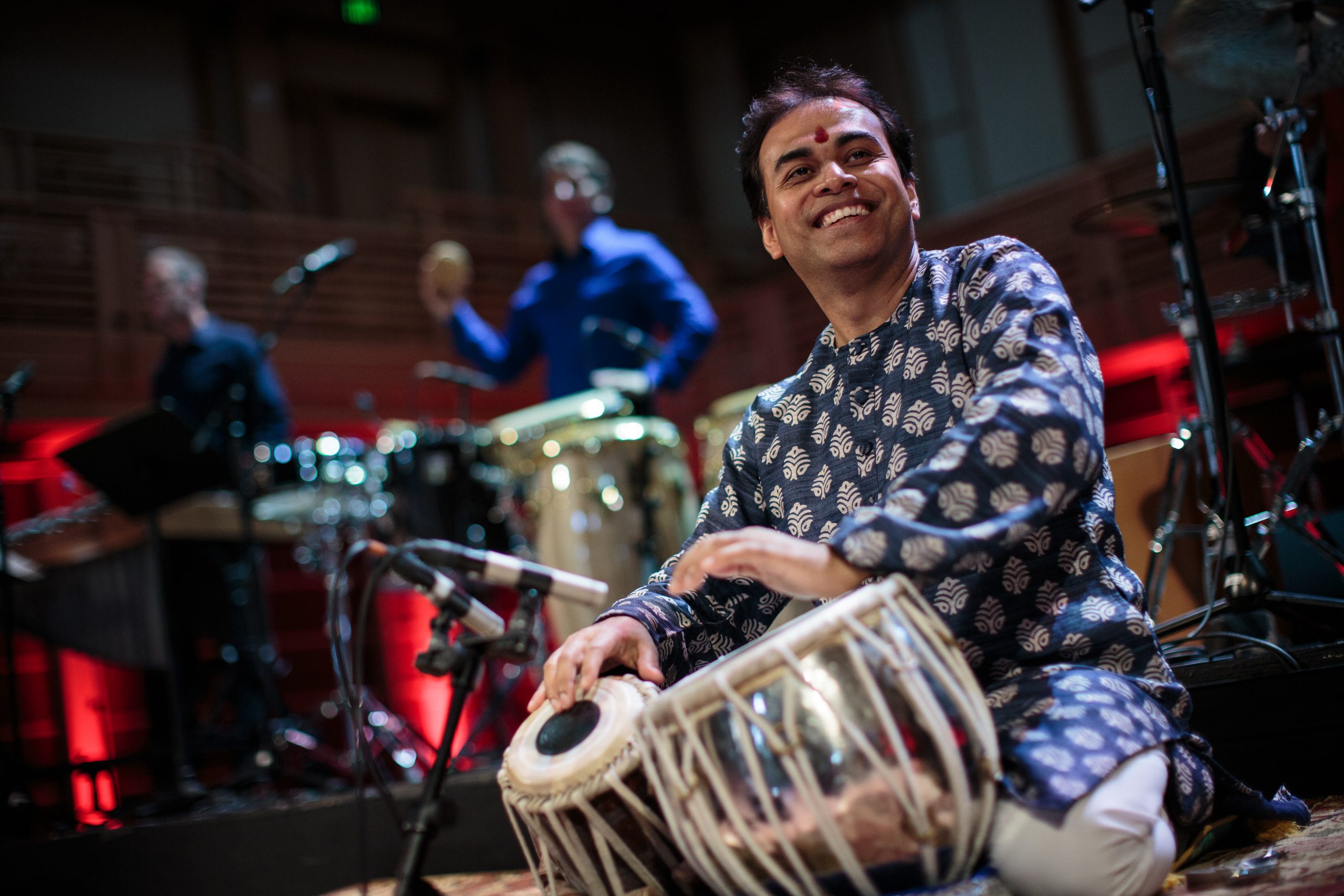 Sandeep Das and the HUM Ensemble

Sandeep Das, one of the world’s leading tabla virtuosos, returns to Carolina Performing Arts with the renowned HUM Ensemble for Delhi to Damascus, a new concert celebrating the shared history between India and the Middle East and inspired by the Sanskrit phrase Vasudhaiva Kutumbakam, meaning “the world is one family.”

A Guggenheim Fellow and Grammy Award recipient, Sandeep Das is one of India’s top tabla maestros and composers, building a prolific international reputation that spans over three decades. He has performed countless times alongside other musical giants, including Amjad Ali Khan, Yo–Yo Ma, and Silkroad Ensemble. In 2010, Das founded the HUM Ensemble, which is dedicated to promoting global understanding and transcending borders through the power of music.

About Delhi to Damascus

A collaboration between Indian Classical/Semi-Classical and Middle Eastern Music, Delhi to Damascus is the first initiative under the canopy of Sandeep Das’ larger project, “Transcending Borders One Note at a Time,” which aims to harness the transformative power of music and inspire positive social change.

Delhi to Damascus will feature the tabla, sitar, kanun, sarangi, and vocals—some of the most iconic instruments of these countries. The eclectic and soulful repertoire—a mix of new compositions and rearrangements—draws on traditional Indian ragas, melodic Arabic maqams, philosophical Sufi poems, pulsating folk grooves, and lyrical thumri. An earnest quest to start a dialogue, spark compassion, and stimulate the imagination to see beyond geographical borders, Delhi to Damascus is a musical invitation to a spiritual odyssey, inspired by the spirit of Vasudhaiva Kutumbakam—the beautiful ideal of inclusion, empathy, global community, and humanitarianism.

Runtime: approximately 75 minutes, including intermission. Masks required at all times while inside CPA venues during the 21/22 season. For additional health and safety information and more, visit our FAQ page.

Since his debut concert at the age of 17 with legendary Sitarist Pt. Ravi Shankar, Sandeep Das has established himself as one of India’s top tabla maestros. As Yo-Yo Ma says, “When Sandeep plays the tabla, he is a creator of myths, a master communicator, and an orchestra, all in one.”

In addition to performing at major Indian music festivals with renowned musicians such as Amjad Ali Khan and Hariprasad Chaurasia, he is one of the unique Indian Classical musicians to expand beyond his traditional roots and collaborate with musicians and ensembles from across the globe.

Das has also received the prestigious Brother Thomas Fellowship, the New England Choice Artist of the Year Award, and multiple grants and commissions for his prolific work as a composer.

Tamer Pinarbasi is the leading kanun (zither) virtuoso in the world. Born in Turkey, he started his kanun lessons at the age of ten, and began recording albums with top Turkish artists three years later.

At the age of 17, he began touring Europe, and after thousands of performances throughout the world, he moved to the United States, where he branched out to explore Jazz, Funk, Flamenco, Western Classical, and Contemporary music styles with groups such as the New York Gypsy All-Stars and the Secret Trio.

Tamer’s unique technical approach, playing with all ten fingers rather than the traditional two index finger-strumming, as well as his knowledge of both the eastern micro-tonal (makam) system and western harmony, paved the way for him to become one of the world’s greatest kanun virtuosos. He is an active composer, and his most recent CD releases include Romantech, Dromomania, Soundscapes, and Three of Us, in addition to hundreds of other recordings made over the years. He is frequently invited to host workshops at prestigious institutions throughout the world.

An LA-based performing artist, composer, and educator, Rajib received his musical training in sitar from his father Pt. Durgadas Karmakar as well as Pt. Ramdas Chakravarty, and in vocals by Ustad Ghulam Akbar Khan. He often experiments with world music, rock, and jazz, and has performed at music festivals worldwide.

His various world music projects include groups such as Dhara (USA), Wahh World Fusion (USA), Loop Science(Germany), Nada Naissance (France), as well as collaborations with organizations such as Sony, Warner Brothers, Dreamworks, and Disney to name a few. He has been an artist-in-residence and guest lecturer at several universities, including Brandeis University, CSUN, and the Center for World Music. He received his MFA in Music from California Institute of the Arts, USA, and is the founder and current Artistic director of the Los Angeles International Music and Arts Academy.

Suhail is an eighth-generation sarangi player from New Delhi, India. He started his musical training at the age of seven with his grandfather, the late Ustad Sabri Khan, and uncle, Ustad Kamal Sabri.

A multifaceted artist, composer, singer, and songwriter, he is well-versed in varied genres from Indian Classical Music to Contemporary Rock, Jazz Fusion, Folk Music Fusion, and World Music. In 2013, he was appointed as a Cultural Ambassador for the British Council in New Delhi. He is a contracted artist with Domino Record Label Band, Yorkston Thorne Khan, and he has been extensively touring with the Indo-Welsh folk/jazz band, Khamira, and the Indo-Korean collaboration, Hauz Khas Connection. He is currently based in the USA.

About the HUM Ensemble

Founded by Sandeep Das in 2010, the HUM Ensemble is dedicated to promoting global understanding and transcending borders through the power of music. The HUM Ensemble’s debut concert took place in New Delhi and by popular demand it continued performing throughout India in major cities such as Mumbai, Kolkata, and Chennai. The ensemble has since expanded to a global scale, performing at venues like the Europalia Festival in Brussels, Cal Performances in Berkeley, California, and other venues throughout the US, in addition to regular invitations for residencies and masterclasses at major universities.

read more about the HUM ensemble

Artists of the HUM Ensemble have performed at music festivals worldwide including the World Music Festival (Prague), WOMAD (Madrid, Incheon, Australia, and New Zealand), and the Mystic Music Festival (Turkey), among many others. The ensemble’s debut album, which features the Delhi to Damascus repertoire, was recently released in May 2020.

HUM is additionally a nonprofit organization in India, and currently sponsors the musical education of six visually-impaired children through the HUM-Lanxess National Scholarship.