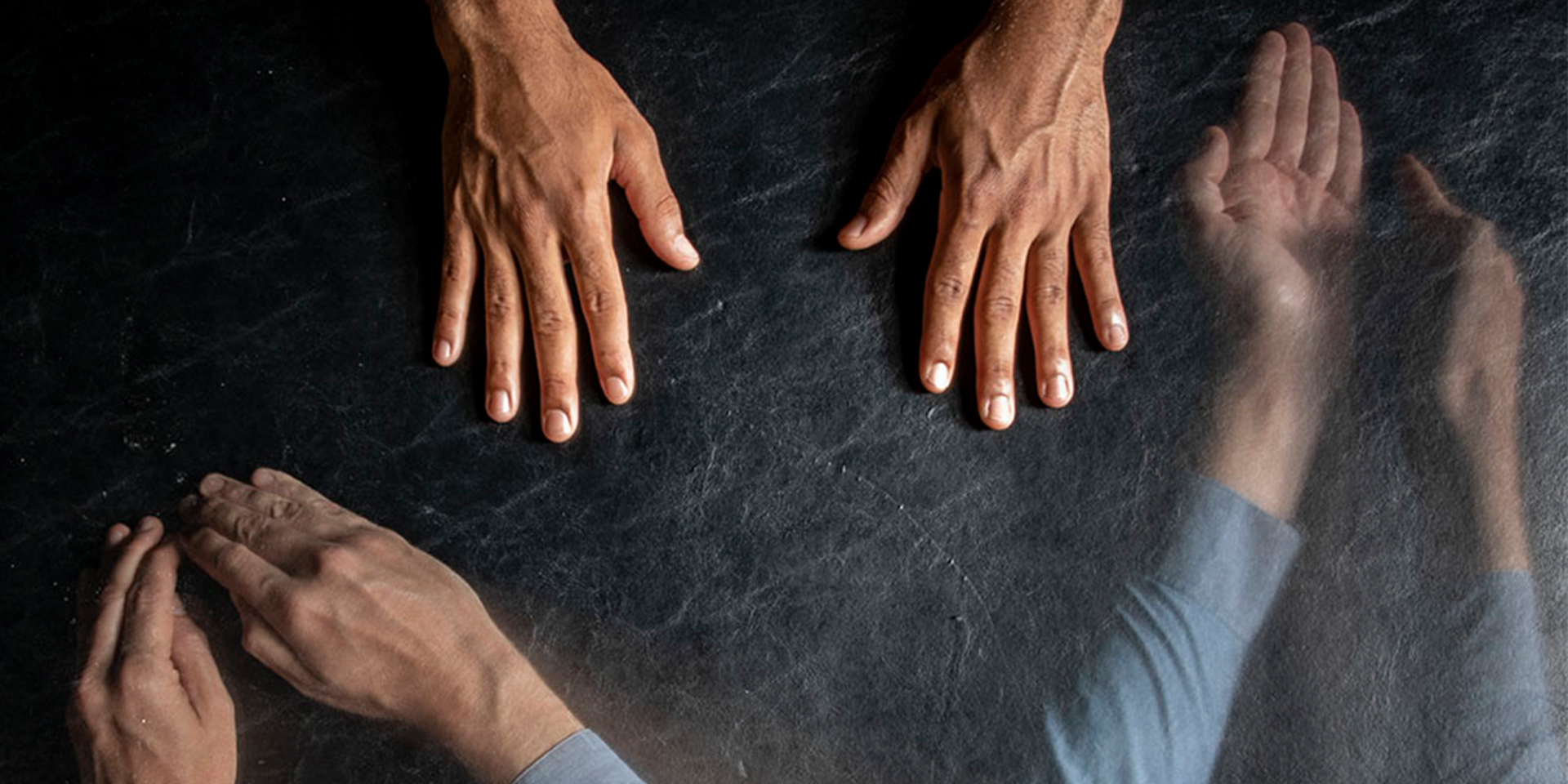 General admission tickets available for $15. UNC Student discount not allowed for this event.

A Thousand Ways: An Assembly brings together an audience of twelve strangers to construct a unique and intimate theatrical event. Using a shared script, an evocative story of perseverance comes into focus, tracing how we consider one another individually and collectively after so much time apart.

A Thousand Ways: An Assembly is the final experience of the Obie Award-winning 600 HIGHWAYMEN’s triptych of encounters between strangers. Each installment of the series plumbs the essence of performance, bringing people together in the creation of a moving live experience. The work explores the line between strangeness and kinship, distance and proximity, and how the most intimate assembly can become profoundly radical.

The New York Times called A Thousand Ways, “Splendid. Funny and sweet and unexpectedly moving” (Part One: A Phone Call) and “a work of inquisitive humanity and profound gentleness, which over the course of an hour buffs away the armor that lets us proceed through our days brusque, numb, and antagonistic.” (Part Two: An Encounter)

This is an invitation. You need no training. You are the expert.

Praise for A Thousand Ways

“An almost surreal blending of performance and reality … “An Assembly” gives unparalleled space to consider other human beings in a typically unyieldingly fast-paced world.” – Seattle Times on Part Three

“This piece uses tools of theater — text, storytelling, the agreement to gather at an appointed time to have a collective experience — to achieve goals of theater, foremost the stoking of empathy and compassion. How extraordinarily “An Encounter” does this struck me only afterward.” – New York Times on Part Two (NYT Critic’s Pick)

“Represents truly adventurous, assumption-busting thinking about what theater is and what it can be.” – SF Chronicle on Part One

Tickets are required for Part Three: An Assembly. All phases of this project are ticketed separately. You do not need to have attended Parts One and Two to attend Part Three.

Just like Parts One and Two, you will be creating a theatrical experience with the other audience members in attendance at CURRENT ArtSpace + Studio. Using a stack of instructive notecards, you will collectively recount a timeless story of perseverance — of audacity in the face of uncertainty. This elucidating experience invites participants to consider one another — individually and collectively — and the significance of coming together after so much time apart.

Run time is 60 minutes. Age restriction is 16 years and older. Due to the intimate nature of this performance, late seating is not available.

NOTE: A Thousand Ways: An Assembly requires audience members to wear masks for the duration of the event.

For additional health and safety information and more, visit our FAQ page.

Read More about Parts ONE AND twO

Each installment of A Thousand Ways, which has been experienced by thousands around the world, plumbs the essence of performance, bringing people together in the creation of a moving live experience. The work explores the line between strangeness and kinship, distance and proximity, and how the most intimate assembly can become profoundly radical.

On a simple phone call, you and another audience member – nameless strangers to one another – follow a carefully crafted set of directives. Over the course of the journey, a portrait of each other emerges through fleeting moments of exposure and the simple sound of an unseen voice.

Open to participants from A Phone Call and new participants.
You and a stranger meet on opposite ends of a table, separated by a pane of glass. Using a script and a few simple objects, a simple exercise of working together becomes an experience of profound connection with another person.

The cards are written in English, and in a 15-point typeface in black and blue ink on a light gray background.

If you have questions or concerns related to accessibility, please contact us.

600 HIGHWAYMEN (Abigail Browde and Michael Silverstone), “standard bearers of contemporary theater-making” (Le Monde), who have “quietly been shaking up American theatre since 2009” (The Guardian), have been making live art that, through a variety of radical approaches, illuminates the inherent poignancy of people coming together. Their productions exist at the intersection of theater, dance, contemporary performance, and civic encounter.

In 2016, Abigail and Michael were named artist fellows by the New York Foundation for the Arts and are currently Associate Artists of IN SITU, the European platform for artistic creation in public space.

This production was commissioned by The Arts Center at NYU Abu Dhabi, Stanford Live at Stanford University, Festival Theaterformen, and The Public Theater. Part Three was supported by residency partnership with the University of Colorado, Colorado Springs and Green Box Artsand was originally commissioned and co-conceived by Temple Contemporary at Temple University, USA. Original support for the production was provided by The Pew Center for Arts & Heritage, Philadelphia.