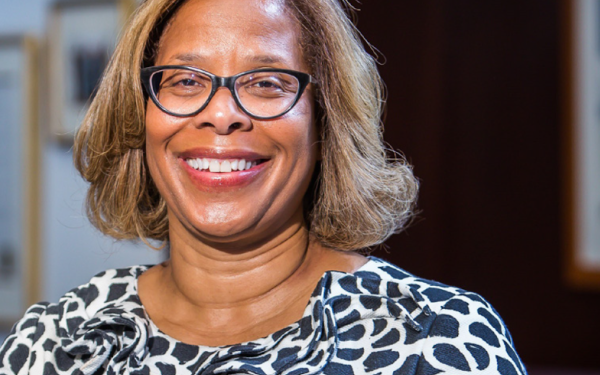 “Art helps inspire you and gives you something to be happy about, especially in challenging times. Something to look forward to, but also something to learn from; most significantly, it offers a context for us to have difficult conversations.”

Karol Mason, ’79, is one of those delightful people who seems to have endless energy and drive, gushing with excitement as she talks about her work, her family, and the things about which she is passionate. A former UNC Board of Trustees member, she is the president of John Jay College of Criminal Justice, serves on the International Advisory Board of Carolina Performing Arts, plays the piano, visits museums, and loves visual and performing arts. Born and raised in Amityville, New York, as one of four children to a teacher and a public health administrator, Mason was reared with a clear sense of the value of a good education and the importance of community service.

Karol’s parents both grew up in the South during segregation, and went on to earn graduate degrees in their respective fields. The lessons they imparted on Karol and her siblings taught her that education is critical for opening doors to many opportunities. As president of John Jay, which is part of the City University of New York (CUNY), she is proud that students have greater access to higher education because of low CUNY tuition and the tuition-free degree program that was recently announced.

The arts, too, are an integral part of both the John Jay community and Karol Mason’s life. “Art helps inspire you and gives you something to be happy about, especially in challenging times. Something to look forward to, but also something to learn from; most significantly, they offer a context for us to have difficult conversations,” she says. John Jay has an art and music department, their own gallery, and even a partnership with Lincoln Center. The hallway to Karol’s office serves as a gallery space as well, with rotating exhibits. In her spare time, Mason is an avid concert- and theater-goer, and she is glad to have discovered that there is a piano at John Jay for her to play. “My instrument is still in Atlanta, but next time, I will bring my sheet music, so I can practice,” she reports excitedly.

For Mason, the invitation in January 2017 to join the International Advisory Board of Carolina Performing Arts could not have come at a better time. A former UNC board member, she had recused herself from UNC-related activities when she joined the Department of Justice—first serving as deputy associate attorney general and then as assistant attorney general. But the day before an email from CPA Director Emil Kang popped into her inbox, she had left the DOJ and felt ready to reconnect with her alma mater. Karol was elated to accept a place on CPA’s board. “The arts bring me such joy, and I love being connected back to Carolina,” she beams. “Carolina is critical to who I am. During my years at UNC I learned who I was and what my priorities were.” And now, Karol can share her expertise and get up close and personal again with the college that has meant so much to her.

In fact, Carolina Performing Arts has always occupied a special place in Karol’s heart. Attending performances whenever she can, she is consistently amazed at the level of artistry presented at CPA. One of her favorite Memorial Hall memories is seeing “The Blues Project” by Dorrance Dance with Toshi Reagon and her band BIGLovely. “It was amazing! And to think that I saw it first in Chapel Hill and then made all my friends go buy tickets and see it when it came to the Kennedy Center!”

Karol counts the day in May she receives the Carolina Performing Arts season brochure as one of the highlights of her year: “It’s like getting the Christmas catalogue in the mail. You’re so excited and can’t wait to make your choices.” Carolina Performing Arts, too, is excited that Mason chooses to volunteer her time and expertise to serve on its board, and for her heartfelt passion and support for the performing arts at Carolina.